When I arrived in Cambridge in 2015, I was immediately surprised at the seeming lack of a unified creative scene within the student body. Having grown up in Falmouth, where the arts University functioned as the heart of the small town, it struck me… 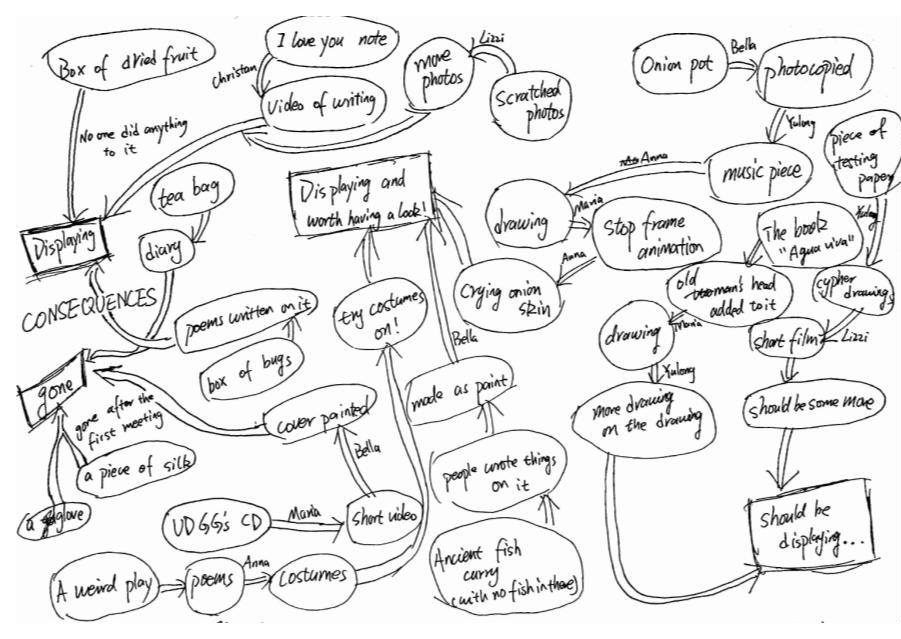 Consequences was an art collective that met during Lent Term 2019. It culminated in an installation at the end of term which documented the group’s work.

The collective worked according to these principles:

The idea for Consequences came from the desire to create a serious yet playful space for creative making in Cambridge. I am always impressed by Cambridge’s drama and poetry scenes but as someone who enjoys painting and drawing I feel that the same creative circles do not exist for the visual arts. Consequences was an attempt to create a setting where student artists could come together and engage with each other’s work. Consequences explored the interplay between the group and individual in the creative process and wanted to challenge the individualistic myth of the lone artist. 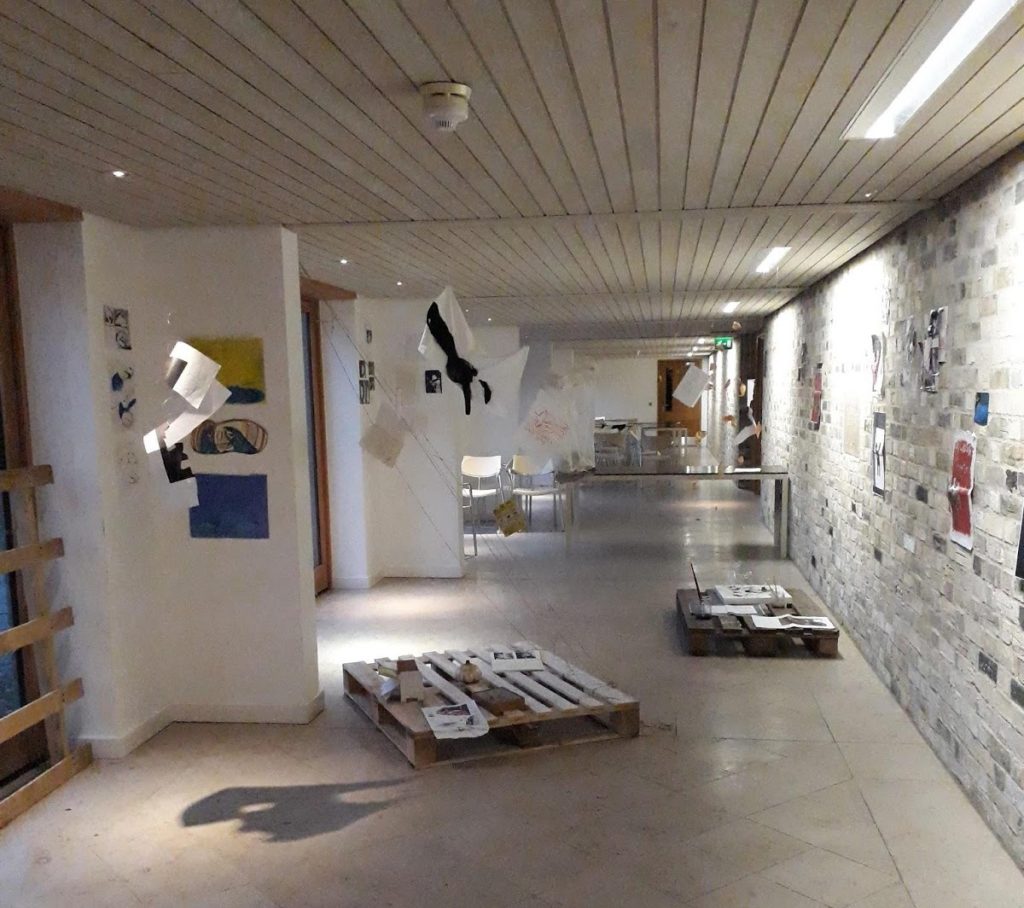 A curry packet expired in 1998, a technologically obsolete CD from an obscure rock band, a scrap of paper faceless customers in a stationary shop used to spill their secrets in testing pens…

Links between objects and responses and individuals become confused, thoughts and styles are inter-laced and a web of inter-connection and difference is produced. Sometimes it can seem like a late-night drunken conversation – despite the chaos, links seem deeply significant. Your work influences others when they respond, building chains of objects and allowing alternative perspectives. The final installation wanted to highlight the playfulness and humanity in both appreciating chaotic variety and discerning underlying patterns and meanings.

One of the biggest challenges in organising Consequences was finding a suitable place in order to have meetings. The lack of art rooms at most colleges made it difficult to have sufficient space and material to make group art work. However it was lovely to be part of creating a framework in which people felt free to play and I hope that this spirit can continue to be encouraged in the Cambridge art scene.

Notes is a student-run publication based out of Cambridge. We showcase the best of new writing and art in Cambridge and beyond, by students and non-students. During Michaelmas (Winter) and Lent (Spring) terms we publish every fortnight and in Easter (Summer) term we publish one…

The Cambridge University Poetry and Prose Society (CUPPS) was founded by Renchun Ho and Murat Demir in 2017 with a view to uniting  disparate strands of the lively literary scene in Cambridge. As of the 2018/2019 academic year, I, Madeleine Pulman-Jones am the president of the society, with Vanessa Choek as vice… 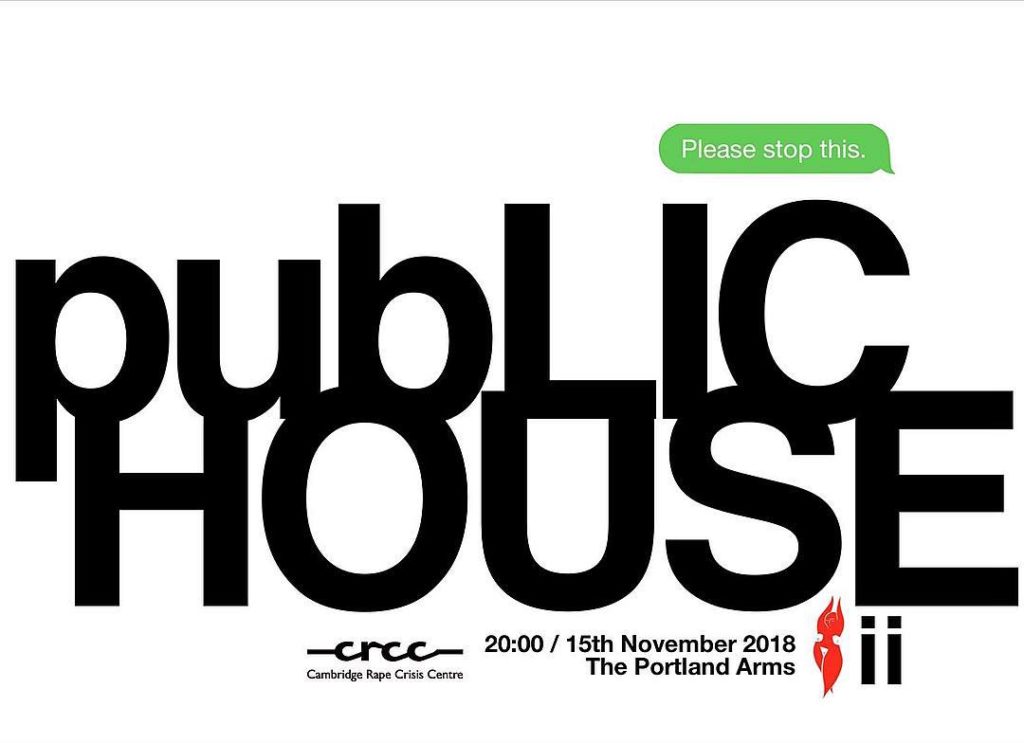 The OVC was founded as a reaction to the ‘old boys’ club’ mentality surrounding theatre in Cambridge, and aims to put on and support
innovative, unusual and or ‘difficult’ theatre. We operate outside of University theatre structures and therefore have more freedom to
experiment with form, content and location. Our focus is predominantly on new writing and material from female and non-binary people, though we are a non-exclusive group that looks to perform anything that feels relevant to the experiences of our generation. The name ‘Old Vag Club’ was conceived of as a joke, and is not intended to be bio-essentialist.

Since we started, the OVC has staged a selection of fantastic plays including Untag Me by Thomas Dixon, featured at Strawberry Fair, and
What Would Harold Pinter Think, by Alexandra Blanchard, directed by Eliza Bacon. We have also sponsored critically praised plays like Walk Swiftly And With Purpose by Siofra Dromgoole, and BirthdA by Alannah Lewis.

One of our biggest projects has been Public House (and Public House 2), performed in November 2017 and November 2018. The plays are interactive performances, using excerpts from verbatim stories of sexual harassment, abuse and assault to create an immersive theatre piece about the pervasive nature of sexual violence in our society. The rehearsal process is collaborative and focused on devising as a group, with actors able to share their own experiences and include them in the play. We attempt to make this experience feel safe and potentially healing for everyone involved and many of the 30 or so contributors and actors who participated in the first production said they felt a sense of catharsis in sharing their experiences and having them be taken seriously. We have donated over £700 to The  Cambridge Rape Crisis Centre with ticket sales from the plays. The first Public House was listed as one of Varsity’s Top Ten Theatre Highlights of 2017, and the second we did not have reviewed, as we have come to realise that the play does not require reviewing – it is for the cast, the directorial team, and the audience, not for critical praise. The conversations that happen during the rehearsal process and after the play are what’s important.
We also run consent workshops alongside the play, and are in the process of working with Cambridge University’s Student Union and the Good Lad Initiative on further workshops.

Arranging the material for and directing the Public House plays has been by far the most worthwhile thing I have done while at Cambridge, and I, along with the rest of the original OVC members, have full trust that the next committee will carry the mantle forwards with the sensitivity, kindness and dedication to voicing the painful realities of sexual violence that the OVC is known for.

The New Hall Art Collection is the second largest women’s art collection in the world. It features over 500 artworks by contemporary women artists from around the globe. This year, the Collection has been particularly active, running bi-monthly themed tours, screenings of films by female…

I was a co-curator of the third space exhibition for diaspora artists, which was held in January this year at the Sidney Sussex squash courts. The aim was to provide a platform for the artistic expression of those who have experienced displacement, otherness or cultural…

The University of Cambridge has cultivated an active and vibrant scene for documentary filmmaking over the 2018-2019 academic year. Students have been benefited from a host of events and hands-on workshops allowing them to hone their skills, including a two-day workshop with BAFTA-winning documentary filmmaker Gavin Searle. The year’s flagship film event was the Watersprite Film Festival, which received over 1,000 submissions from over 100 countries, and included a category for documentary filmmaking. Particularly notable was the production of socially-conscious documentary films covering a wide range of topics, from homelessness to mental health. Hear from the some of the directors themselves about the work they have made over the past year (edited for brevity). 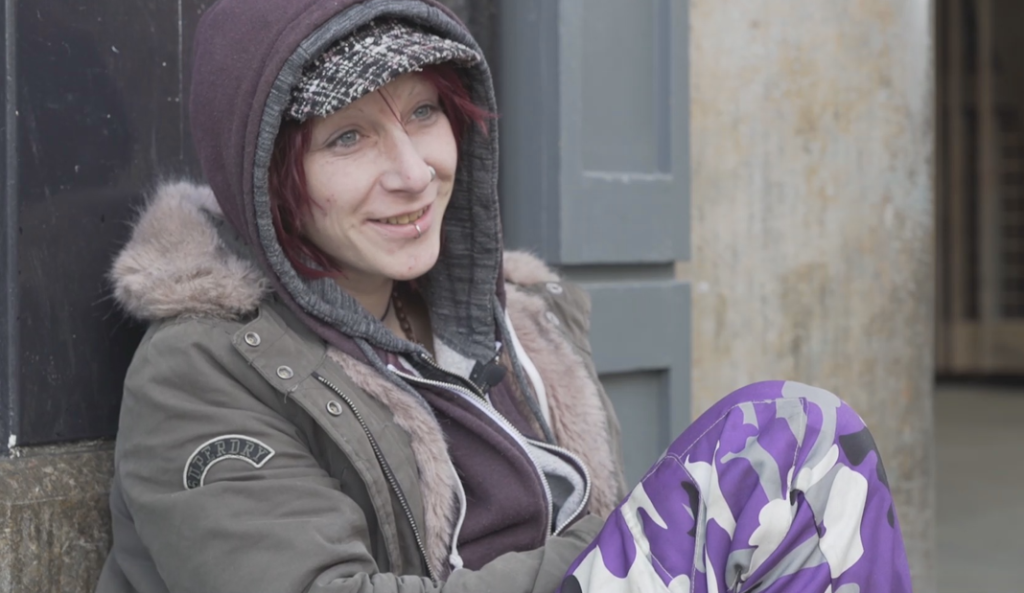 Their Story is a 20-minute student-made documentary that sheds light on the issued faced by the vulnerably housed in Cambridge. The interviewees discuss their individual stories and frustrations about the stereotyping of the “homeless community”. This documentary is part of an ongoing project to break down the stigma against people who are vulnerably housed or live and work on the Cambridge city streets. My brilliant team and I started to have more and more conversations with rough sleepers in Cambridge. We determined to share some of the unique stories and personalities of the people they met. Following my experience making ‘The Cambridge Climate’ (2018) and inspired by a Varsity documentary on the wealth gap in Cambridge (Joe Cook and Abdullah Shah, 2018), I decided to use my interest in documentary film to share these conversations in hopes of sparking more debate about how society perceives those in such a vulnerable position. 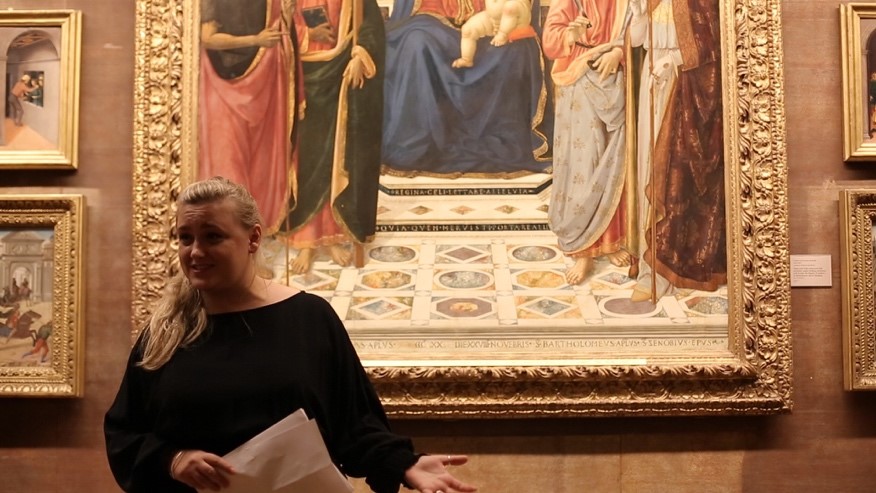 It Takes Art is a short documentary that discusses how different art forms are effective in expressing a feminist message. Created by Lina Fradin and directed by me and Lina, this film interviews students DJs, thespians, comedians and poets, as well as documenting events at the Fitzwilliam Museum and the New Hall Art Collection. 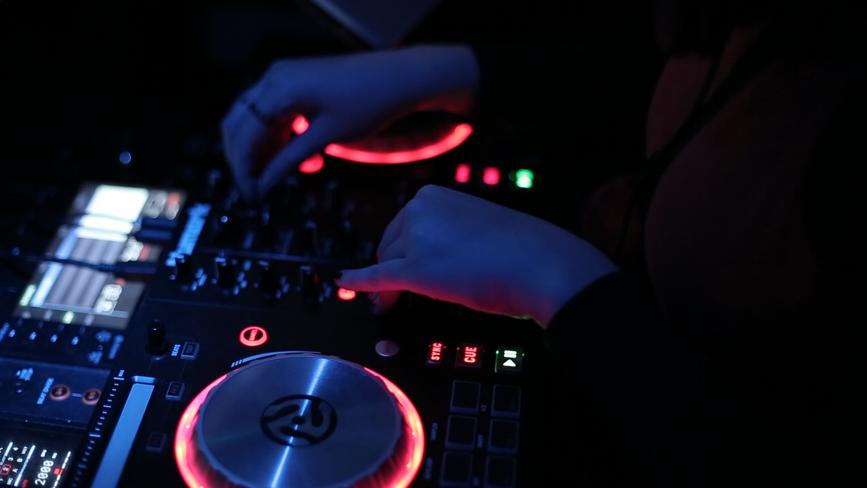 Feeling Blue? began in March 2018 when my co-creator, Anthony Baston, and I had a conversation about suicidal thoughts, toxic masculinity, and depression – in the gym, of all places. There was, and still is I think, a sense in which conversations about mental health seem to burst out of every corner of Cambridge, from JCR meetings and policy discussions, to quiet chats over coffee or wine, and even confessions in the gym – all with a passionate intensity reserved for few other topics. Anthony and I decided on a 5-minute documentary exploration and looked to include footage of three or four contributors.

By the time of its release, in May 2019, we had conducted thirty interviews (120,000+ words of transcripts) and had received a further thirty-nine video statements from students who we couldn’t get to; we had issued dozens of Freedom of Information Requests on topics ranging from Scholars’ Prizes to UCS funding; we had analysed hundreds of pages of University minutes, policy documents and strategy papers; and we had poured over student surveys and articles and memes. To say the project snowballed would be an understatement! 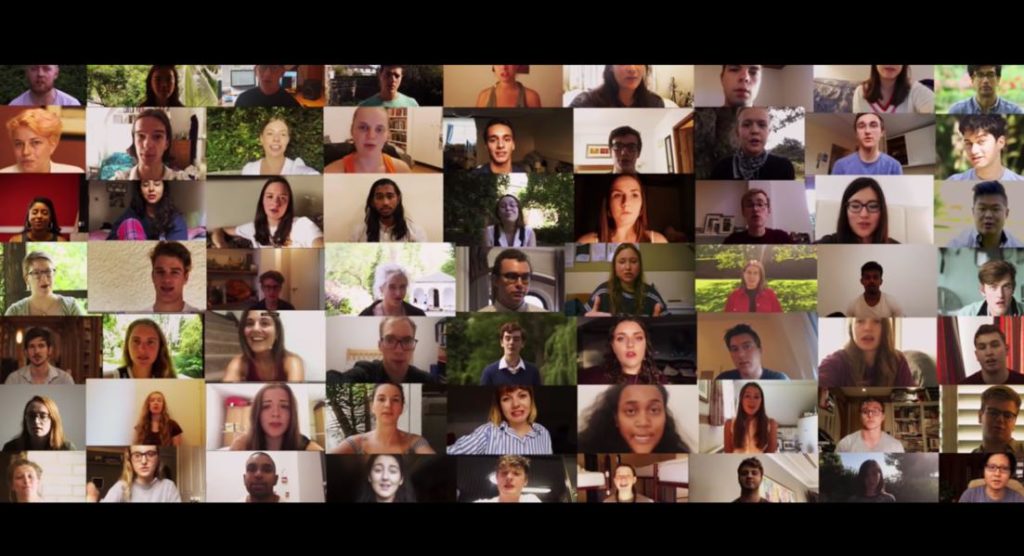 From quite an early point, the main narrative challenge became clear: how do you reflect very real, often very raw, experiences of mental health crises told by students who feel let down and forgotten, whilst simultaneously commenting fairly on the difficult, delicate and often complex University structure and institutional nuances?

Our solution to this challenge was a twofold approach: alongside a 54-minute film, we produced a 60-page document of ‘Findings and Unanswered Questions’, which looked to lay out the issues in plain English and attempt, not to draw conclusions, but to prompt further discussion. As of mid-May, we have handed the document over to the University, and after a couple of very positive meetings, we look forward to continuing the dialogue.

We are, however, very aware of our shortcomings. I flinch regularly when re-watching at visual and audio slip-ups, and our qualitative research was informal, statistically limited and partially self-selected. But most pertinently, despite our best efforts, we were not able to explore certain issues as thoroughly as we would have liked: the unique mental health experiences of BME students being one such example, graduate students being another. In this light, I desperately hope that members from these aforementioned groups use Feeling Blue? as inspiration to launch their own investigations, be they documentary or journalistic, and we’d love to help if they do.

This isn’t the first step, and I am sure it won’t be the last. But I hope it’s something. 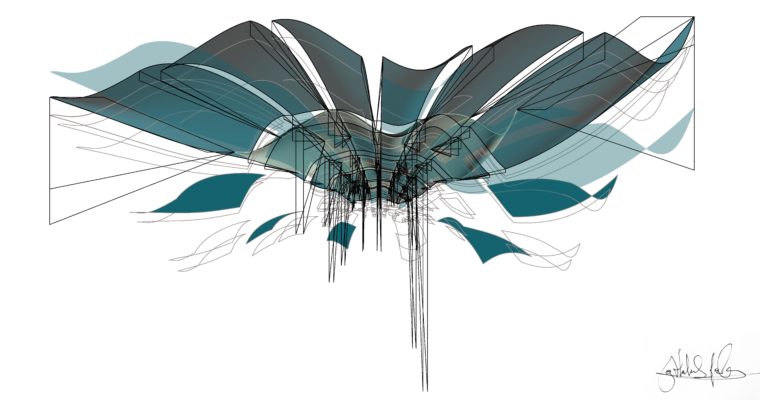 polytope = poly (“many”) + topos (“place”) In mathematics, a polytope is a multi-dimensional object equivalent to the polyhedron in three-dimensional space. This series of exercises attempts to renegotiate the strict nature of common and regular polytopes. The shifting of basic geometric shape faces to…