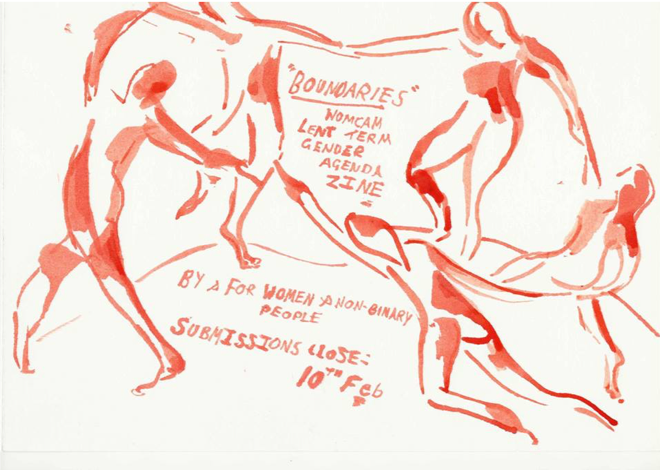 Zines are like the stapled fragments of a collective visual diary. They were and continue to be instruments of protest and change. They open up creative spaces that don’t expect perfectly crafted thoughts or works but instead allow for and indulge in the messiness of art // words // coherence and in-coherence alike.

I ran for the position of CUSU Women’s Campaign Zine Officer for 2018-19 because Gender Agenda was the first creative sphere I encountered in Cambridge which didn’t expect refinement and/or some kind of censored narrative. Gender Agenda accepts everything that is submitted and each copy is given, not sold. Its politics and its practice are built on inclusivity.

The zine maker Rachael House once wrote in fat blue marker on a recycled fanzine: ‘THERE’S NO SUCH THING AS A BAD DRAWING, IT ONLY HAS TO BE STRONG ENOUGH TO HOLD UP THE IDEA’. It is this concept – that what you feel and what you say and what you make is enough – that the process can be the prize – that formed the backbone of last year’s Gender Agenda projects.

Each term I selected a theme to focus the zine around (Michaelmas – Comfort // Lent – Boundaries // Easter – Intimacy) and each term my zine-team and I organised exhibitions and skill-sharing craft workshops to go alongside the themes (Michaelmas – weaving // Lent – drawing with wire). I wanted people who had little confidence in their artistic abilities to be able to enter a space and make and chat and be part of this community of belonging.

Within marginalised and oppressed groups there is often talk of ‘claiming’ or ‘reclaiming’ space. This implies taking somewhere, such as Cambridge, that was not built to include women and non-binary people, and making it ours. Taking off the paper lantern and saying, here we are. We are not going anywhere. My intention when curating the termly exhibitions was to do something similar, to transform the Sidney Sussex Squash Courts or the black box theatre underneath Pembroke into a new kind of space. This did and did not happen. 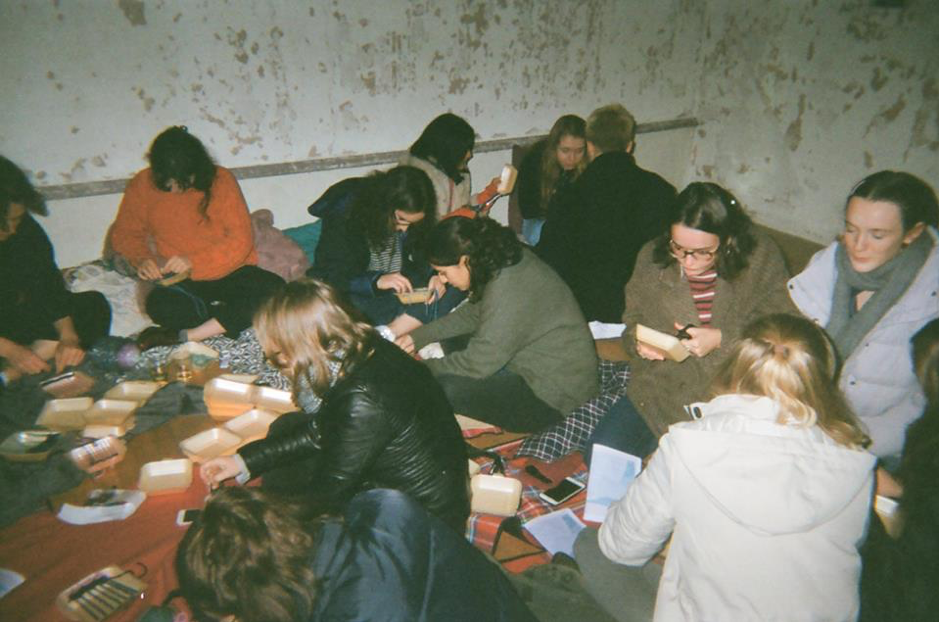 “Imagine you are stepping into the Michaelmas 2018 ‘Comfort’ Gender Agenda Exhibition, you walk through the squash court door and see a projection on the ceiling of a film, documenting the art workshop from earlier that term. Directly below this moving image are the other exhibition attendees, sitting on cushions or blankets with burger-boxes and wool between them, teaching each other how to turn the polystyrene into a loom, a creative practice that was invented by the artist Natanya Mark specifically to make weaving more accessible for visually impaired people. Looking up from them and to your left you see permanent markers dangling above burger boxes that have been cut in half and stuck on the wall. On each burger box different people who have entered the exhibition have written what brings them comfort: tea with a friend, Friends the TV Show, chocolate. On the opposite side of the room is the art and poetry, lit by bicycle lights that have been blue tacked to the wall to solve the problem of keeping a warm low light whilst still being able to actually read the work. Below this, the zines, stacked on long wooden benches. The music playing is the collaborative Spotify playlist that all women and non-binary people in Cambridge were encouraged to add to, choosing songs that for them resonate comfort. Halfway through the evening there is a singer-songwriter performing original songs, as well as a poetry reading.”

The night itself was not perhaps that different to any other student-run exhibition. Wine was handed out, and everyone had to keep their coats on as we couldn’t figure out how to work the heating in the squash courts. However, the collaborative assortment of thoughts and feelings, sketches and musings contained within the ‘Comfort’ Zine helped to build a space which existed beyond the physical confines of any room. Sidney Sussex Squash courts transformed into somewhere as familiar and intimate and safe as a bedroom. The words and images on the walls were as much about the artists as they were about the viewer. Women and non-binary people who did not know each other stepped into the room and were connected.

The projects Gender Agenda took on last year and the creative platform itself matters because it shares the lived experience of women and non-binary people in Cambridge. It matters because it encourages community between makers and creators as opposed to competition. It matters because it is welfare-orientated and political. It matters because by flicking through the stapled together collections of bits and bobs you can make the space your own. If I were to offer any advice for future Zine Officers or exhibition curators or organisers in general I would suggest that they ask themselves, who is it for? What is the purpose of it? When someone flicks through the pages how do you want them to feel? How can you include every person who walks into the room, so that everyone is given the opportunity to belong in the space?

Digital issues of Gender Agenda can be found here. 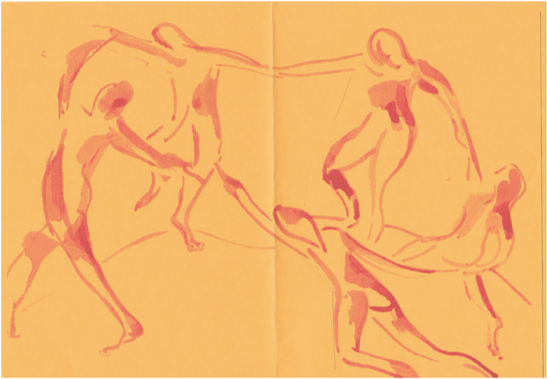